CAMEROON: TORTURE BEHIND CLOSED DOORS / MEN AND WOMEN AT THE CONTROLS

Authorities in Cameroon illegally detain and torture people for their views

WHO ARE THE SPONSORS ? 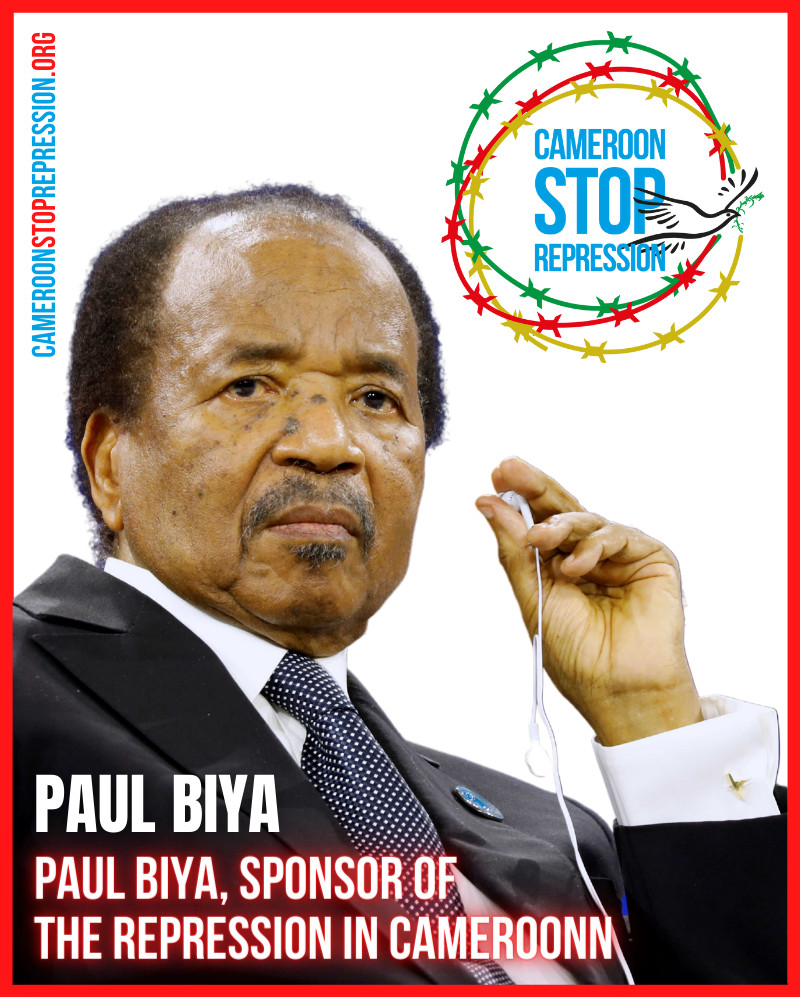 Since then, Mr. Biya worked to muzzle this party by illegally and arbitrarily arresting, torturing and detaining its members and sympathizers. Thus, regime established arbitrary detention, torture and other inhuman, humiliating and degrading treatments, a central tool in the arsenal of preserving the power of Mr. Biya, which is therefore its keystone. In this regard, the latter relies on a network of personages with various responsibilities. We will present them one after the other, both from the point of view of their official or unofficial functions and from the facts attributed to them. 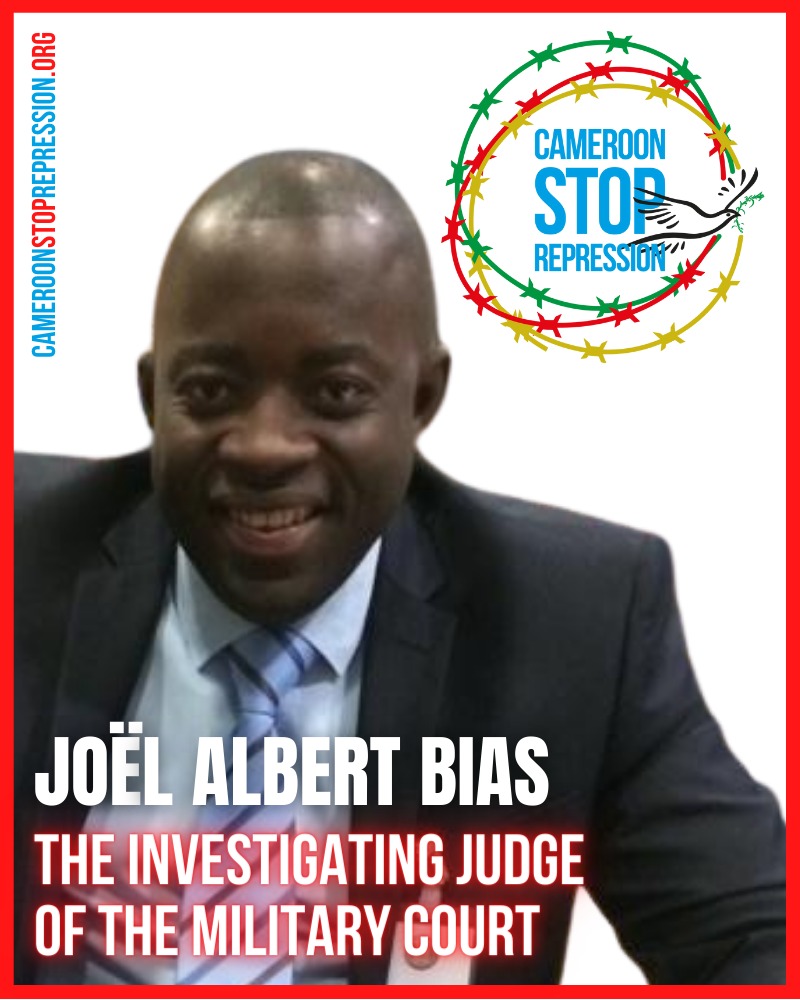 The investigating judge of the military Court

In Cameroon, military courts have become an important cog in the repression machinery put in place by the Biya's regime against political opposition in general, and against the members of the Cameroon Renaissance Movement (CRM) in particular. Yet, military courts should, under no circumstances, be competent to judge civilians, as recalled in the guidelines and principles on the right to a fair trial, of the African Commission on Human and Peoples' Right and other international legal intrusments. Following the peaceful march of September 22, 2020, no less than 500 people were arrested, mostly CRM militants and sympathizers, 126 of whom are still in detention today. Never lacking incongruous maneuvers to intimidate and muzzle the CRM, the Yaoundé's regime has set up an inexplicable division of the public action which is exercised, sometimes before ordinary courts such as the first instance court, sometimes before exceptional courts as it is the case with the military court for the same facts qualified as offenses. At least 48 other militants of the CRM who were arrested on september 22, were indicted for "attemption revolution", "rebellion", "aggravated assembly" and "lack of identity card" by the military court of yaoundé, and remanded in custody at the city's central prison. This is especially the case of Olivier BIBOU NISSACK, spokesperson of Maurice KAMTO, and Alain FOGUE TEDOM, national treasurer of the CRM.

Since their remand in custody, militants of CRM that are imprisoned since September 22, 2020 see their release hearings beeing systematically returned for reasons as fallacious as "the lack of lighting in the courtroom", "extraction defect" from their places of detention.

The investigating judge seeks to drag out the proceedings to reassure the regime about the continued detention of the imprisoned CRM militants and executives.

The Collective of lawyers "Me Sylvain Souop", formed in the defense of the CRM's militants, which has never ceased to denounce violations of their clients' rights, in particular physical violences perpetrated by the police, takes offense at the slowness in the procedure and points the finger at magistrate Joël Albert Bias.

Indeed, on February 24, 2021, the Collective of lawyers "Me Sylvain Souop" sent a request to the President of the Yaoundé military court, for the removal-replacement of the investigation judge Joël Albert BIAS for denial of justice, violation of reasonable time limits and vice of partiality.

In the statement of the same date, the lawyers denounce "the drowsiness of judicial information" and the inertia characterized by the absences of investigative actions since the placement of detained defendants.

The investigation judge Joël Albert BIAS, blithely violates a fundamental principle of law, the reasonable time; the compliance of which being the more essential since the accused persons are deprived of their liberty and the procedure must be characterized by urgency and an obligation of diligence.

The detained militants and their councils justify the application for recusak of this judge by.

"legitimate doubts about his ability to conduct with impartiality the necessary investigations for the mission of military examining magistrate which he accepted, namely, to gather the elements in charge but also in defense of the offenses which he himself qualified of "attempted revolution, rebellion, aggravated assembly, lack of identity card".

In 10 months of custody he ordered, following indictments to the cart and each more fallacious than the others, the investigating judge Joël Albert BIAS did not carry out any diligence, did not rendre any act, did not hear any of the people he detained. Detainees are justified in concluding that

"The drowsiness observed by the designated investigation judge, Mr Bias Joël Albert, being more likely to create the feeling that the applicants, as they are detained, will never go to trial in time, and will never benefit from justice rendered in a timely manner by jurisdictions established by law, because already undergoing secret sentences that have been pronounced by judges that are invisible and inaccessible to them"..

And the "Me Sylvain SOUOP Collective" to conclude that

"Detainees feel that the opening of an investigation by the military examining magistrate Bias Joël Albert over a period of 6 months was only a new means of imposing new arbitrary sentences on them ". This judge "acts as if he had taken a sleeping pill; he has not taken any substantive act of investigation so far, has not issued even the first interview notice since the signing of the orders and remand warrants".

The judicial authorities of Cameroon, a country of judicial insecurity, have decided, against all logic odds, to keep Joël Albert BIAS as investigating judge in this case.

It is under these conditions that by request of July 8, 2021, the militants and sympathizers of the CRM, arbitrarily detained in the prison of Nkondengui, individually seized the President of the Appeal Court of the Center of a new request for recusation of the investigating judge Joël Albert BIAS.

This judge refuses to rule on both the request for release and the findings of incompetence of the military court made since March 23, 2021.

For incarcerated militants, this refusal to declare the law can only be the result of the manifestation of an hostility's feeling fed against them as CRM's militants, an opposition party that the regime has undertake to systematically repress.

By making himself the instrument of the repression, the negation and the violation of fundamental rights by the Yaoundé regime, Joël Albert BIAS is not the independent and partial judge who instructs the prosecution and the defense in respect of the defense rights. He has become a major player in the “judicial torture”, to use this concept dear to Barrister Meli, institutionalized in Cameroon. Joël Albert BIAS is the small hand of the judicial machine to crush the political opposition of the MRC.

The height of injustice is that this system has become accustomed to hiding behind what it calls the force of law.

As Montesquieu said, "There is no crueler tyranny than that which carries the shade of laws with colors of justice".