The Chairman of the human rights and freedom Committee in Cameroon Bar pointed out in a statement on the 26th of March 2020, that:

— The total number of prison staff was estimated at 4,674 people,

— 18,435 prisoners are waiting for their trial, i.e. more than half of the prisoners,

— The prison occupancy rate is 193% in the central region and 299% in the coastal region,

— Regarding health coverage, a doctor was assigned to 1,383 detainees.

— Distribution of prisoners in Kondengui prison.

Ward 1: after the so-called "residential" quarters, this is the first of the cleanest quarters where prisoners are more or less responsible.

Ward 2: quarter of people with tuberculosis or any other disease requiring quarantine.

Ward 3: initially dedicated for detainees who are prosecuted for reasons such as breach of trust, fraud etc., today we find a strong community of our compatriots arrested in the context of the Anglophone crisis as well as detainees prosecuted for murder, armed robbery etc.

Ward 4: this district has two cells, one called responsible and another infamous and called "passage cell". It is supposed to welcome all inmates sent to prison, regardless of the reason and regardless of the length of detention. This cell is supposed to reduce a man to his simplest expression, to make him understand that he is just an animal. That’s how you can find between 80 to 100 people in this cell and it doesn’t move anyone. But in reality, to escape the passing cell, you have to bribe the ward commander with a large sum of money. The ward commander is himself a prisoner, usually the oldest. The ward commander keeps a notebook in which he records the names of all new detainees. 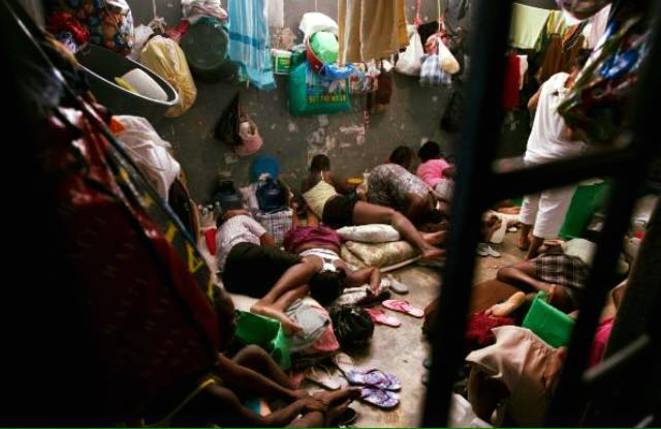 These two quarters (6 and 7) are baptized "Kosovo" and represent the most dangerous quarters of the prison. The quarter is 6 for much feared inmates such as robbers, traffickers of human bones etc.

— The Mandatary: those benefiting from a berth

— The “Dormaterres”: those who sleep on the bare ground

— The dorma-outside: these are the most numerous. They sleep outside in the space that serves as the quarter yard and are exposed to rain and other inclement weather.

The state of health is to be deplored. Wards 8 and 9, where more than 3,000 prisoners are staying, that is around 1,500 detainees per quarter, have only three showers each and only one water point. Any toilet is protected by a door for privacy. So when an inmate is squatting to relieve himself, the queue begins right in front of him. A part from the DDP and ministerial quarters, the situation is almost the same.

As far as the treatment of the prison administration is concerned, be aware that everything has a price in prison:

— Entry in a quarter that is not your district of assignment and, as far as Kosovo is concerned, leaving the district has a price

— The bench on which inmates sit to interact with a visitor

— The assignment in a quarter

— The assignment in a room

— The granting of a berth

As for the meal, two main meals are served to the detainees: rice with peanut sauce and corn chaff (a mixture of corn and beans)

Meals are prepared by “corveillables”. In prison, the “corveillables” are the prisoners whose sentence will soon expire (generally less than two months). They are therefore allowed to perform corvees such as cooking meals for inmates outside the prison. These meals are cooked in aluminum drums and are stirred by shovels. After cooking, the meals are transported to the prison inside the pots and are distributed in the buckets to the representatives of each room. In fact, in each room, there is a local chief, a local mayor and a treasurer. The local mayor takes care of the cleanliness of the premises and is responsible for collecting the local's meal in a bucket. He then takes care of the redistribution to all inmates in the room. The quality of the meal is really to be feared. In fact, in prison we eat to keep our strength and survive because the meals offered to prisoners are tasteless.

The prison has a health center. The Staff is made up of prison guards and prison administrators. When an inmate is ill, he goes to the center and pays a 100FRS booklet bearing his name, the date of his entry into prison (also called the date of the committal), the reason for his imprisonment, his ward and its local number. After consultation, if the case requires hospitalization, the first infusion is free and the others are the responsibility of the patient and generally cost twice as much as the normal cost of an infusion. If an inmate is sick and has no money for treatment, it is clear that he will pass from life to death. If the case does not require hospitalization and does not require a prescription for the purchase of medicine from pharmacies outside the prison, then the medicines are offered to him free of charge. The first dose is taken in front of the nurses and the other doses are taken in the detainee's area of residence. A nurse comes to the ward during the intake hours and reads the names of the patients for them to come and take their medicines, and each inmate comes with water to immediately drink his medication in front of the nurse. But very often the detainees bribe the nurse to collect their medicines and keep them themselves. In each ward, the administration appoints a detainee called a "Chargé Malade". This “chargé malade” is the first one to whom a patient addresses himself so that he can expedite his consultation and he is also responsible for the follow-up of patients. In addition, when the case requires a prescription for medicine to be purchased outside the prison, the prescription is at the patient's expense. When the technical platform - almost non-existent in the prison health center - does not allow efficient care of a sick prisoner, the prisoner is referred to a hospital outside the prison and all the related costs are the responsibility of the concerned prisoner. In fact, the detainees are regularly ill and there are only two general practitioners for a total of nearly six thousand (6000) detainees. Overcrowding and unsanitary conditions in prison are real vectors of disease. The almost non-existent technical platform is the source of several cases of death.